No new units are available in Navin's Eden Park 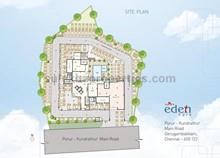 Navin's Eden Park is a magnificent residential project located in one of the rapidly developing Area. This Home brings you all the happiness of the world as soon as you step in. The project is spread across the acres of green land where you experience serenity and stillness in great form. The home has good ventilation and well-spaced rooms, which are thoughtfully planned and designed to experience a blissful life. Here, you will discover an infinite feeling of optimism and peace. This home ensures you and your family lead a healthy and comfortable lifestyle. The developer’s focus is to create houses that are functional, utilitarian and enchanting. This project presents spacious and skillfully designed homes. It is well-equipped with all the essential amenities to facilitate the needs of the residents. Every single thing from the interiors to the exteriors of the flats are crafted with precision and perfection. Natura Homes is the perfect home for a lifetime of delighted moments with your family. The development invitations you to love the peacetime and indulgences of your room like you have always wished for. Lead the kind of life you always wished to combine extensive and offer many features that one can wish for.

Porur is one of the prime suburbs of Chennai located in the south-western part of the city. The locality is known for its chemical industries, manufacturing plants, shopping malls and luxurious housing facilities. Karambakkam, Alapakkam, Arunachalam Garden, Lakshmi Nagar, Ramakrishna Nagar, Mangala Nagar, Meenakshi Nagar, Samayapuram Nagar, Mugalivakkam and Nagar are some of the important areas in Porur.

Due to the presence of three IT SEZs - YCG IT Park, IT Park and Jayanth Tech Park, Porur is emerging as a premier IT hub of Chennai located close to OMR. The IT Park houses companies like Logica, IBM, Mphasis, Syntel, iGATE, Cognizant and Petrofac. The TCG IT Park has been taken up by HP while the Jayanth Tech Park houses HTML Global Solutions.

Porur is well-connected to the city of Chennai via an extensive network of roads. It is linked with Nungambakkam by Arcot Road, Guindy and Poonamalle by Mount-Poonamalle Road and Road that connects it to the temple town of Kundrathur. These three roads intersect at Junction which is an important junction for buses running to Bangalore and Kanchipuram. To make Porur more accessible and traffic free, the Highway Department has planned to construct a flyover at the junction of Mount and Arcot Salai road.