No new units are available in Sri Sai Garden

Mugesh Constructions is based at Chennai, Tamil Nadu (INDIA). We are successfully engaged in offering our clients our prestigious services in the field of land promoting in and around Chennai. Backed with experience of over a decade, the overall objective of our company is to uplift lower income group and rural population in improving their quality of life by making them owners of their dream Residential Flats. We have formed genuine association with our customers so as to offer right as well as cost competitive deals Our business operations are led by Ms. V Vennila, who has with him rich experience in our industry sector. His extensive industry experience in the field of real estate development as well as collective and determined efforts of our team assists us in successfully providing clients with access to beautifully placed and landscaped locations, which can meet complete residential, commercial and industrial development needs of our clients. 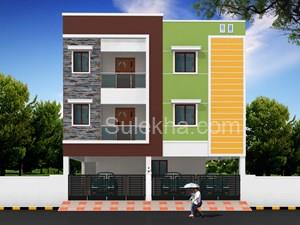 Sri Sai Garden is a grand residential project established by Mugesh Constructions.  The moment you step into this apartment, you will be enchanted by the positive aura that surrounds the place. Whether as an investment or for moving in with your family, it is the best option for you to invest. All the basic necessities required are at a stone’s distance away from here.

"Porur is the most prominent and developed residential locality of the Chennai city. Being located on a vital position on the Mount-Poonamalle Road, Porur is known for its Chemical Industries, Manufacturing Plants, IT Corridors, residential colonies and vegetable markets. Special Features:

Porur is well-connected through the bus networks. The recent construction of flyover on the Porur-Poonamalle Road has drastically reduced the traffic congestion in Porur.

Another economically viable mode of transport is through share autos. People in this locality make best use of share autos for their convenient travel.

The most-renowned MIOT and Ramachandra Hospitals are located at a short distance of 4 kms.