No new units are available in Team Mani Team Nest 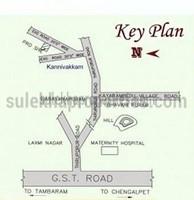 Team Mani Team Nest is a magnificent residential project located in one of the rapidly developing Area. This Home brings you all the happiness of the world as soon as you step in. The project is spread across the acres of green land where you experience serenity and stillness in great form. The home has good ventilation and well-spaced rooms, which are thoughtfully planned and designed to experience a blissful life. Here, you will discover an infinite feeling of optimism and peace. This home ensures you and your family lead a healthy and comfortable lifestyle. The developer’s focus is to create houses that are functional, utilitarian and enchanting. This project presents spacious and skillfully designed homes. It is well-equipped with all the essential amenities to facilitate the needs of the residents. Every single thing from the interiors to the exteriors of the flats are crafted with precision and perfection. This is the perfect home for a lifetime of delighted moments with your family. The development invitations you to love the peacetime and indulgences of your room like you have always wished for. Lead the kind of life you always wished to combine extensive and offer many features that one can wish for.

Guduvancheri or Kooduvancheri is a suburb of south-west Chennai, the capital of the state of Tamil Nadu in South India. It is a rapidly-developing town along National Highway 45 that connects Chennai with the cities in southern and western Tamil Nadu. The neighborhood is served by the Guduvancheri Railway Station of the Chennai Suburban Railway Network. Guduvancheri is a hub for towns like Adhanur, Madambakkam, Kavanur, Neelamangalam, Kayarambedu, Perumattunallur, Pandur, Karanaipudhucheri, Potheri, Nellikuppam, Thailavaram, Thiruporur and Vellancheri. Guduvancheri has a railway station, bus stand, upgraded primary health centre [GOVNT], telephone exchange, electricity office, post office, police station and higher secondary schools. The suburb is close to SRM University and its group of institutions. It is becoming the largest residential area between Tambaram and Chengalpet because of the IT companies in and around Gudu-vancheri like Accenture, Ford, Mahindra World City and SEZ.
View more
A Team Promoters And Builders Pvt Ltd
By sending a request., you accept our Terms of Use and Privacy Policy